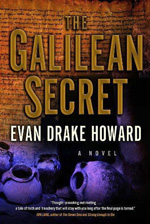 Can a mysterious scroll found in the Judean Desert unlock the secrets of eternal love and end religious warfare before it’s too late?

Only if the right people possess it.

Only if they can prove who wrote the scroll’s electrifying message.

When Karim Musalaha, a Palestinian on the run, seeks refuge in a forgotten cave near Qumran, he discovers a half-buried clay jar that contains a fragile scroll. His quest to discover its origins takes him on a high-speed chase through hostile Jerusalem and West Bank neighborhoods. Caught between his brother’s relentless ambition for martyrdom and the forbidden love of a Jewish woman with ties to the highest levels of the Israeli army, he must choose between honoring his father and betraying him to serve a higher purpose.

The scroll’s message also resonates with Judith of Jerusalem, a first century Jewish woman who, under the cover of darkness, gallops into the desert with the brother of the man she was betrothed to marry. When her allegiance to the burgeoning Zealot revolution pits her against the Roman occupiers and their priestly collaborators, Judith sees the cruelty of war and realizes her mistake. But is it too late for her to escape and find forgiveness? A letter written by a mysterious Galilean rabbi holds the answers, but the Romans have placed a price on his head. Should she risk her life for a rabbi she hardly knows, or risk her soul for a cause and a man whose beliefs she now rejects?

Bound by a letter that spans two millennia, both Karim and Judith will either succumb to hatred, violence and hopelessness, or reveal a wisdom that could save us all.

Read Chapter One of The Galilean Secret here:
theGalileanSecret.com

Since Dan Brown’s bestselling The Da Vinci Code, readers have been fascinated with the mysterious relationship between Jesus Christ and Mary Magdalene. Howard, a Rhode Island pastor, offers a fascinating and unique interpretation, setting out a path to realizing the feminine and masculine divine within every soul. The story, essentially a reworking of Howard’s 2007 self-published novel The Lost Epistle of Jesus, switches back and forth between two plots, one in the present day and the other in first-century Jerusalem. Karim, a young Palestinian, tries to escape his jihardist father, leader of the Palestinian Patriotic Alliance, and stumbles upon a buried relic. His discovery takes him on a high-stakes adventure to bring the relic’s contents to the world. Simultaneously, we read of Judith, a young Jew of the ancient world, who becomes involved with anti-Roman zealots, the radical rabbi Jesus, and his companion Mary Magdalene. Both stories progress toward the same conclusion—a search for Jesus’ deepest and as yet unrealized truth that will bring peace and love to all who can truly understand its worth.

With such heightened tensions around the Middle East, particularly with Israel’s almost hysterical opposition to the recent Goldstone report, it should be no surprise that a new novel, The Galilean Secret, is scheduled to be released this May. Its author, Evan Drake Howard, has a doctorate in theology and I think readers will find its message timely and a good read.

The story, or stories, evolves around a letter that was written in Israel in Roman times and its exciting recent discovery in our time. The letter was written by one no less famous than Jesus of Nazareth to Mary Magdalene. In the letter Jesus explains love relationships, plus giving insights into male-female characteristics that exist in every person.

Using a literary construct the reader is introduced to the political and religious tensions that mark both eras, even though the events described are separated by two millennia. Both stories vividly describe acts of passion, love, deceit, treason, and perhaps most important of all, forgiveness and love.

While Mr. Howard takes certain literary liberties, he stays fairly close to the New Testament story as understood by most mainline Christians. Some might feel discomfort with the thesis that Jesus and Mary Magdalene shared a deeply human emotional attraction. Howard treats this with great sensitivity and it becomes the basis for why the letter was written in the first place.

The stories are not preachy, but they help readers grasp the importance of all people – Jews, Christians or Muslims – to respect each other.

The reader vicariously experiences the confusion between the teachings of Barabbas the Zealot, who sees violence as the best way to rid Israel from the Roman occupiers, and Jesus, who taught a more perfect way even though it led to the Cross.

Contrived fictional comparisons can be odious; but there is a poignant familiarity to today’s Israeli blockage to creating a State of Palestine, coupled with its justifiable fear of being destroyed by its Arab and Muslim neighbors. The fundamental question is whether this Gordian knot can be cut only by military force, or if there is a better way; one that recognizes that both sides share a common humanity along with all that that entails; mutual respect, love of family, and the will to create a society of harmony and peace.

It is into this vortex of ancient and modern violence that the story of how young people from disparate backgrounds fall in love and risk their lives, then and now, to save this precious ancient artifact – and maybe all mankind.

Perhaps the book is just silly fiction, but fiction often has a way of intruding into true life. Sometimes it is the best way to glimpse the agony of 1.5 million people destined for life in a squalid concentration camp. Or why some people suffering occupation strike out in anger.

Perhaps the greatest lesson is that, despite legitimate fears on both sides, the Israel/Palestine status quo is intolerable and mutual destruction should not and cannot, in the words of Adolf Hitler, be the ‘final solution.’ ”

Praise for The Galilean Secret:

“Evan Drake Howard’s powerful and moving parable presents an earnest portrayal of Jesus as an enlightened leader whose fundamental teachings of love, peace, suffering, forgiveness, and freedom can be shared by all who seek peace in a turbulent world. The Galilean Secret offers an inspiring message that transcends religion.”

“The effectiveness of Evan Drake Howard’s narrative is rooted in its vivid characterizations of human longings – the perennial search for the sacred, for a life of worth – for eternity.”

“In this finely crafted novel is an open message of hope that everyone can appreciate. It demonstrates that Jesus is much bigger than any church or any single religion. Good news indeed.”

– Harvey Cox, Professor of Divinity, Harvard University and author of The Future of Faith

“Evan Drake Howard breathes new life into the religious thriller genre in this spectacular debut. The Galilean Secret is the book The Da Vinci Code wanted to be, but fell well short of from a historical and factual standpoint. As thought provoking as it is riveting, Howard’s ground-breaking tale of truth and treachery will stay with you long after the final page is turned and leave you waiting breathlessly for his next effort.”

– Jon Land, author of The Seven Sins and Strong Enough to Die

Read Chapter One of The Galilean Secret here:
theGalileanSecret.com 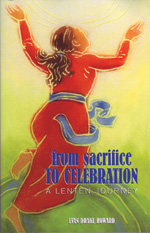 From Sacrifice to Celebration

In From Sacrifice to Celebration, author Evan Drake Howard brings the journey from Lent to Easter vibrantly alive for our times. The book dramatizes a peculiar irony: The age of nonstop entertainment and high-tech gadgetry has spawned an epidemic of boredom. Living in this push-button society, people are haunted by the wilderness within. Each chapter addresses this problem by focusing on a Gospel character’s journey from boredom to bonding. Woven throughout From Sacrifice to Celebration is an excitement about the future and a renewed relationship with God. “Lent is more than seriousness and solemnity. Like faith itself, it’s an adventure beyond the ordinary.” Whether you use this book as a personal guide or study it in a group, From Sacrifice to Celebration will take you from the daily grind of life to spiritual growth.

Buy From Sacrifice to Celebration from Judson Press »

“A very imaginative story that will touch the hearts of many, many readers.”

“We need to gaze through many facets to discover the deep diamond that is Jesus. This is a good one. It will give you new eyes with which to read the old story!”

– Richard Rohr, Center for Action and Contemplation and author of The Naked Now: Learning to See as Mystics See

The end of loneliness lies not in clever techniques for finding and keeping love, but rather in gaining insight into the essence of love itself—and into how one’s heart can become new.

The insight and the newness are as closely related as salt and the sea. But the natural mind does not understand this; it is shrouded in illusion.

Only by acknowledging the darkness can we take the first step toward the light. God’s own heart, in which the essence of love resides, invites us home. The briefest glimpse of this essence provides inspiration for the journey.

The source of our greatest power.

Sooner or later almost everyone falls in love. Recognize the condition for what it is—a form of temporary insanity. We remain mortal but experience life in heaven.

We become obsessed with another person. Our sleep gets disturbed; we lose our appetite; we can’t concentrate.

These symptoms indicate that we have surrendered part of our soul to this person. We have given him or her the power to heal and fulfill us.

Or to destroy us.

Our salvation lies in taking back the power we have surrendered. As the power originated in our souls, so must we return there and establish deeper intimacy with God and with ourselves. The sooner we begin this work and the more completely we give ourselves to it, the greater will be our chances for survival and growth, not devastation and despair.

The belief that love brings happiness is only half true. The bonding of two souls as one produces a rare form of bliss.

But this isn’t the whole story.

Dark moods can set in. Arguments happen. Sickness or tragedy intrudes. Everything from household duties to the most intimate of matters must be negotiated.

To give one’s heart to another person is to bear a cross. No one loves without suffering.

Making a relationship work demands one’s deepest maturity and strongest resolve. In order to succeed, remind yourself daily that love is not about happiness.

It’s about the evolution of the soul.

No matter what happens, always believe in the power of love. Eventually every force that stands against this power will fade into an abyss of forgotten memories.

Love’s influence is like a tiny glimmer of light in a dark room. As morning comes, the light grows and drives out the darkness.

Align all thoughts and actions with the light. Draw power from this source of nobility, courage, and joy. Hearts that surrender to the light of love will be inspired and transformed.

Read Chapter One of The Galilean Secret here: theGalileanSecret.com